This downloadable video is a rare opportunity to be with Richard Schmid in an informal portrait session while he paints his friend and fellow artist, Michelle Dunaway. With some of Richard’s favorite music – Bach, Beethoven, Schubert and others playing in the background, you will see Michelle’s portrait unfold as he paints.
Throughout the video, Richard not only describes what he is doing and why he is doing it, but he also shares his philosophical thoughts, fascinating stories, and inspirational ideas. Viewers say it is as if you are sitting next to him.
This production, videotaped by the artist and documentary filmmaker Scott Burdick, was initially done for Richard’s private archives. However, it was clear as the footage was reviewed, that this two-day session of Richard painting Michelle in the beautiful north light of Nancy Guzik’s studio, was far too valuable not to be shared with artists and art lovers worldwide.
Rich in graceful solutions when problems arise, you will want to see this over and over. Like Richard’s paintings, the more you view it, the more you see each time. This is an ideal example of Alla Prima painting at it’s best, which has been the hallmark of Richard’s work in his nearly seventy years of painting.

A Note From Scott Burdick.

This downloadable video is licensed for the lifetime of the individual computer, tablet, or phone that you download the lesson onto. Once purchased and downloaded, you may watch and enjoy this video as many times as your like on the computer or device you downloaded it to.
Years of filming, voice recordings, and editing went into sharing these valuable lessons with you. Our sincere thanks for purchasing this video and for helping us to document these insights for future generations.
For more information on Scott Burdick visit:  www.ScottBurdick.com 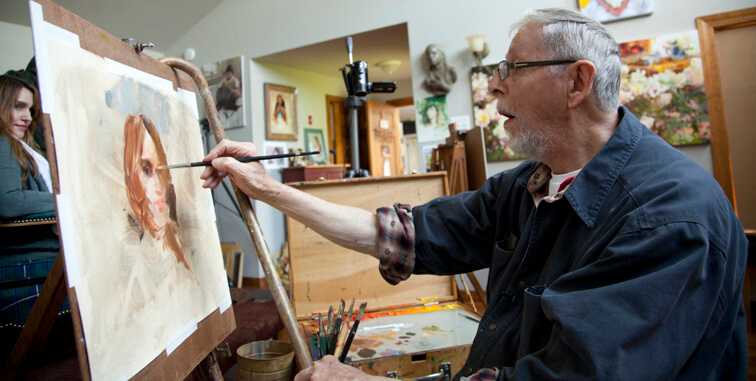